PLAYING TIME: How to earn it, how to lose it.

Whether you’re a pro athlete or a kid just learning the game, you probably didn’t get into sports with hopes and dreams of sitting on the bench.

It’s a lot of work. A lot of time. A lot of pressure. Hard to explain to your friends and your family, and especially to yourself. Plenty of reasons and plenty of excuses: You didn’t get a chance.  The coach is an idiot who hates you. The guy ahead of you sucks but the coach likes him better.  Add your own reasons here.

But it’s a cold hard fact that some players will play, and some will sit. And if you’re one who sits, the way you handle it will determine whether you can change that.

Five things that will NOT get you more playing time:

Your best chance of getting more playing time?

That’s it. Be ready, because at some point, the coach is going to look in your direction and say, “You.”

And you’ll have a split second to react. Maybe someone gets hurt or isn’t playing well or does something the coach doesn’t like, and suddenly you’re going to be the “next man up.” Will you panic?  Did you pay attention in practice? The opportunity may last a minute or a whole game, but what you do in that time is going to determine what you’ll be doing for a long  time afterward.

If you do well and impress someone, you’re in the system. Now the coach knows you can be trusted, and you’ve added a weapon to the team’s arsenal going forward. But if you don’t do well, you’re probably done. The next player will get the opportunity you didn’t grab. You got your chance…you may not get another.

If you’re serious about getting more playing time, ask yourself these questions:

And by the way, this isn’t just about sports. Especially true for business as well: At  some point, someone is going to mess up or an opportunity will surface, and the boss is going to give you a chance to show what you’ve got.

MJ used to tell his teammates at the beginning of the season: “I’m going to pass you the ball one time. If you don’t do something with it, I’m not throwing it to you again. I can miss a shot on my own, I don’t need your help for that. So make something happen, ’cause you’re only getting one chance. Earn it.”

Even at the highest level of competition, plenty of pros don’t start for their teams or get to play in every game.  They don’t like sitting on the bench either. The smart ones show up ready to play. The others wish they still had that seat on the bench when they eventually get cut.

Bottom line, whether you’re a superstar or the last kid off the bench, anyone can show up, work hard, and listen. Nothing will have a greater impact on your playing time than your ability to do those three things. 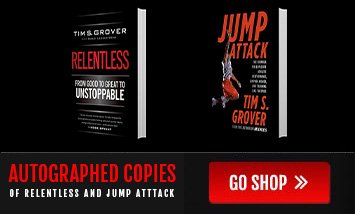